Since making one Cinco de Mayo inspired dessert wasn't enough, I thought I should make two.  And I am taking them places so that the calories treats are shared throughout the Denver metro area.

If I haven't mentioned it before, King Soopers (the local grocery store) knows me.  They send coupons to the house periodically that are customized based on your previous purchases.   Rather than coupons for things that I don't ever buy (diapers, brand name ketchup, spray starch) this go-round it was for a dozen free eggs, a free box of store brand cereal, and $3 off makeup.   Hooray!

So pull out your favorite brownie mix and cinnamon and get baking.   Happy Seis de Mayo! 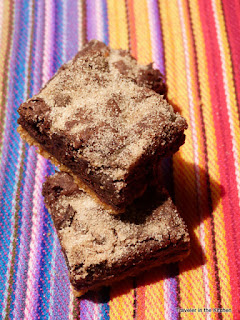 What You Need
1 box of cinnamon toast cereal (I used my coupon for a free box of store brand)
1/2 cup butter/margarine melted
1 tablespoon corn syrup
1 box brownie mix and the necessary eggs/oil/water indicated on the package (I still had a box of Trader Joe's truffle brownie mix from the last TJ shopping spree in Wisconsin...fortunately I'm only weeks away from the next TJ adventure in New Mexico)
1/2 teaspoon cinnamon
1 cup chocolate chips, divided
Cinnamon Sugar (3 tablespoons granulated sugar with 1/2 teaspoon ground cinnamon)

What You Do
Preheat the oven to 350.  Line a 9x13 pan with foil and spray with cooking spray.

In your food processor, finely crush the cereal.   In a large bowl, combine the crushed cereal, melted butter and corn syrup.    This is the base of your brownies.   Press down into the bottom of your pan.

Make the brownies according to the package directions, adding 1/2 teaspoon cinnamon and 1/3 cup chocolate chips (you can certainly use more chips, but the TJ's brownie mix already had chocolate chips included).


What's your take on cinnamon and chocolate together?   Do you like it?

Email ThisBlogThis!Share to TwitterShare to FacebookShare to Pinterest
Labels: brownies