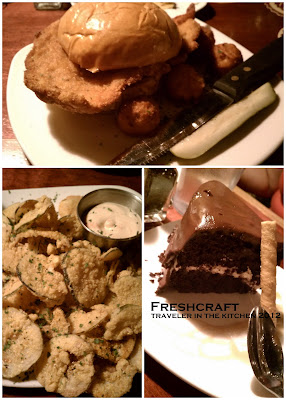 ﻿
Going for drinks and dinner with a friend from work we decided to go somewhere (new to us) in LoDo.   I had looked at the menu for Freshcraft previously, but had not made it there.

The night we were there they had a huge promotion with O'Dell Brewing as well as some other special items including New Belgium Tart Lychee.

I am not a beer person.  Not by any far-reaching, red solo cup stretch of the imagination.   I probably made it through 4 years of college drinking less than ten beers and only then if some random guy handed it to me because he didn't know any better.    And you know that college beer included a lot of Ice House.  Ewww.

Tart Lychee is new to me.  And it was so good I had two.

And on to the menu:
Colorado seems to serve fried pickles in more places than the average state.   The fried pickles here were some of the best EVER.  Sliced super thin with just a light breading, it was dilly goodness in every bite.    My entree was the Iowa Tenderloin.   Yum!    I'm not exactly sure what our dessert was called, but I think it was a slice of Chocolate Stout __________ (adjective) _________ (noun).

Two thumbs up from this girl!
Posted by Jenni at 1:00 AM