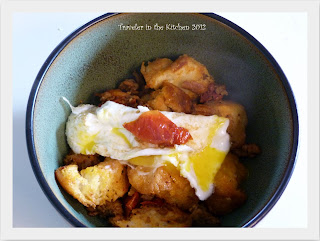 After pondering the importance of breakfast yesterday, I decided it was time to try something new.     The original recipe for Spanish Migas came from My Panera.   What's not to like about something savory that involves garlic, chorizo, bread and olive oil?

Basic Spanish on a Sunday
Amiga = friend (female)
Miga = crumbs
Note to self:  Calling your friend a crumb is probably not a good idea

According to wikipedia migas were traditionally a breakfast made with day old bread.   It's also the word for fashionable first courses for lunch and dinner.   There are Spanish migas, Portuguese migas and Tex-Mex migas.

Cooking with day old bread is a budget saver.  I strolled to the clearance bakery section of King Soopers and got a whole loaf of french bread for 89 cents.   Hooray!   I couldn't find chorizo in the sausage link form, so I used ground chorizo.   And since I don't like bell peppers, I simply left them out.

So here you go:  a breakfast experiment that is definitely worth repeating.    Spanish migas my way.

What You Do
1.  Chop or tear bread into bite-size pieces and place in a large bowl.  Sprinkle the water over the bread and stir/toss to moisten evenly.
2.  Cook chorizo in a large fry pan.  Because it has it's own fat, I didn't need to use the amounts of olive oil in the original recipe.  When chorizo is mostly browned add garlic, paprika and sun dried tomatoes.
3.  Add moistened bread, and a little olive oil, to the pan reduce heat to medium low.  Cook until bread is lightly toasted and golden brown, 15 minutes.   It does pick up the orange/red color of the chorizo.   Stir in another little drizzle of olive oil and season with salt and pepper to taste.
4.  Fry a sunny side up egg.  Or, if the egg doesn't want to come out of the pan nicely, an egg over easy.  Put the bread/chorizo mixture in a bowl and top with the egg.   Grab your fork and your coffee and go to town.  You will be energized and ready to face the day.   Of course, it could also be a good hangover recovery meal.
Posted by Jenni at 9:24 AM

Email ThisBlogThis!Share to TwitterShare to FacebookShare to Pinterest
Labels: breakfast